back to all TOURS 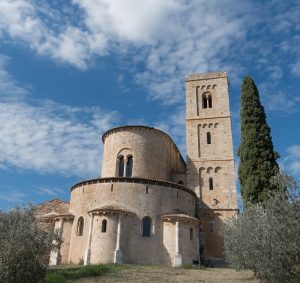 Going south of Siena and along the old Cassia road towards Rome, if somebody comes to Tuscany, there’s another corner of sheer beauty that really deserves to be visited. This special place is situated between the Val di Chiana and Val d’Orcia valleys, renowned as world heritage sites of Unesco. And driving through the typical rolling hills of this area with the cypress trees on top, you’ll be able to enjoy a really unique experience.

Here the nature magically changes colours every season. So, after wintertime when the fields have turned into a dense brown colour called and known as the blush for women “Terra di Siena”, in spring the rain and the wind caresses softly the bright light green grass. During summer, with the yellow grounds not mowed, surely you will find happy sunflowers merrily welcoming you, and when autumn arrives the leaves of the harvested vineyards turn red, just to remind you that you’re running along the roads where two of the full body best Italian red wines are produced: Brunello di Montalcino and the Nobile di Montepulciano.

If you will make this incredible tour with us, for sure you are also going to have the chance to taste directly in the farms, another famous product of the area: the Pecorino of Pienza cheese, with its unmistakable flavor. So, you’ll see on spot any of these little towns has one or more traditions and peculiarities to discover. Montepulciano is full of Renaissance buildings connected by underground hidden tunnels, and is developed along steep roads that climb up since Etruscan times.

Could you imagine to run and roll up a barrel of eighty kilos to the top of the main square? This occurs for a week under the hot Tuscan sun in August during the Bravio challenge. Leaving Val di Chiana, we get to Pienza. Built under the strong influence of the Piccolomini family and its famous Pope Pio II, Pienza became a masterpiece of beauty; projected by the Rossellino architect as the “ideal city” for that time, dominates the astonishing Val d’Orcia with a special view onto Mount Amiata from one of the most romantic paths of love – Via dell’Amore. Just looking at the opposite side of the valley and before being conquered and conquering the fortress of Montalcino – which apart of a lot of history contains the hugest Brunello Enoteca wine shop collection of the area – we often propose and recommend to make a short stop to admire the Monticchiello and San Quirico cypress trees, the latter filmed for the “Gladiator” movie.

Reminding the ancient empire, you can relax in Bagno Vignoni, where a roman thermal bath area was later transformed into an important spa center with a curious and peculiar nice sulphureous old pool in the middle of the village. Instead, if someone cultivates also interest in spirituality has to know that the Val d’Orcia is full of interesting sites that are really worth to be visited. In fact, not far from the Francigena route that was crossed there by the pilgrims on their way to Rome, it’s possible to visit the Abby of Sant’Antimo and its mystique atmosphere, the impressive complex of Monte Oliveto Maggiore and the lonely and lovely Vitaleta’s Chapel.

Meeting point: at the lobby of your hotel or accommodation

Everything included except special fees, lunch and extra time

Booking requested
back to all TOURS