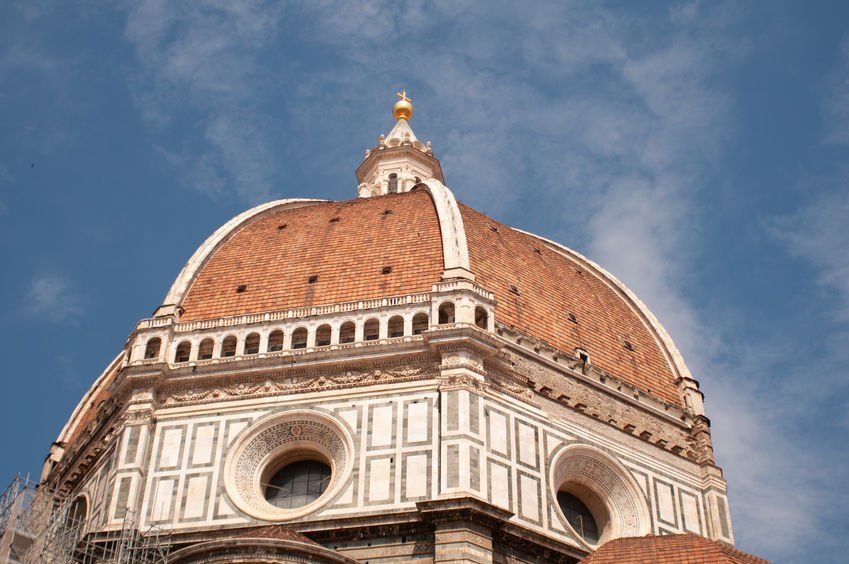 On the occasion of another important anniversary, today we talk about art treating one of the undisputed symbols of the city of Florence. For six hundred years Brunelleschi’s Dome has stood out as the tallest monument above the roofs of the city. Admirable from many distant parts, it is nestled among the beautiful hills that surround it, dominating the entire Arno valley.

Without going too far into the details of its construction, it must be remembered that it is such a unique example of its kind that it is still being studied centuries later. Made with the herringbone brick technique, its shape was imitated from many parts in sacred architecture and not in the whole of the West.

Famous in this regard, according to Vasari’s testimony, was the affirmation that Michelangelo made before leaving for Rome to build the Dome of San Pietro:

“I am going to make your sister bigger than you but not more beautiful”.

And with the same flair and imagination typical of his genius he commented on the unfinished balcony at the base of the dome labeling it as “cricket cage”, and that claim was made on their own by the Florentines who still call that work this way. And if you glance at it from the side of via del Proconsolo, and look carefully, frankly you can only agree. Always from that same side of Piazza del Duomo on the pavement you can observe an indentation with a circle of white marble at the base.

Do you know what it is? Take a look on the top of the dome towards the golden ball of Verrocchio and now again on the ground observing that point and suddenly imagine a lightning bolt that hits that sphere and that catapults it precisely there at your feet. This is what really happened to the bronze original. Then luckily it was hoisted back in its place and today it still sails majestically with an invisible as unimaginable porthole under the cross. Immediately below is the lantern, which is the highest point of arrival at the dome of the Duomo. Needless to tell you how much it pays to climb up, because the view of Florence is simply breathtaking. Of course, one should not be afraid of heights nor of “climbing” 463 steps. Going up to the top, you can take a break, catching your breath and admiring the frescoes by Vasari and Zuccari that decorate the interior of the dome with the detailed representation of the Last Judgment. However you look at it, whether from inside or outside, you cannot help but be enraptured by its beauty. If then one refers to how his vault was erected without the use of ribs and at those times that were, besides hovering around us still a great mystery, it is obvious that it is not only a simple artistic masterpiece, but also a a work of great engineering and scientific significance because it was certainly carried out by means of complicated mathematical calculations. If you are passionate about these subjects and are interested in delving into some of these details, make sure to visit the Museo dell’Opera del Duomo just behind, where you can admire along with many other curiosities and beauties of the Cathedral, the models and tools used for its construction. But to better understand the extent of the whole work, go to Piazza della Santissima Annunziata and look down from Via dei Servi towards the top of the Cupola. From there departed on a huge ramp, workers, oxen and horses with carts bringing the last materials to finish its construction.

Not to be believed, right? And if you are not convinced enough by this beautiful and astonishing vision and want to know even more, go and ask Filippo Brunelleschi directly. You can find him under the right apse admiring his creation. Try to whisper something to him and see if he answers. Given his very shy and private character and his subtle genius, I doubt that you can extort some minimal secrets from him, but you never know … in any case good luck, and above all good vision!